Adobe, in partnership with Google, is pleased to announce the release of Source Han Sans, a new open source Pan-CJK typeface family that is now available on Typekit for desktop use. If you don’t have a Typekit account, it’s easy to set one up and start using the font immediately with our free subscription. And for those who want to play with the original source files, you can get those from our download page on GitHub.

日本語の記事を読む (Read this article in Japanese)

Source Han Sans, available in seven weights, is a typeface family which provides full support for Japanese, Korean, Traditional Chinese, and Simplified Chinese, all in one font. It also includes Latin, Greek, and Cyrillic glyphs from our popular Source Sans family. All told, each font weight in the family has a total of 65,535 glyphs (the maximum supported in the OpenType format), and the entire family rounds out at just under half a million total glyphs. Never before has a typeface family of this magnitude, development scope, and value been offered via open source — which makes it a no-cost solution for designers, developers, and everyday users who need a font supporting a broad set of languages. Adobe is changing the world through digital experiences, and the release of Source Han Sans is yet another way we can forward that vision by giving to the community. 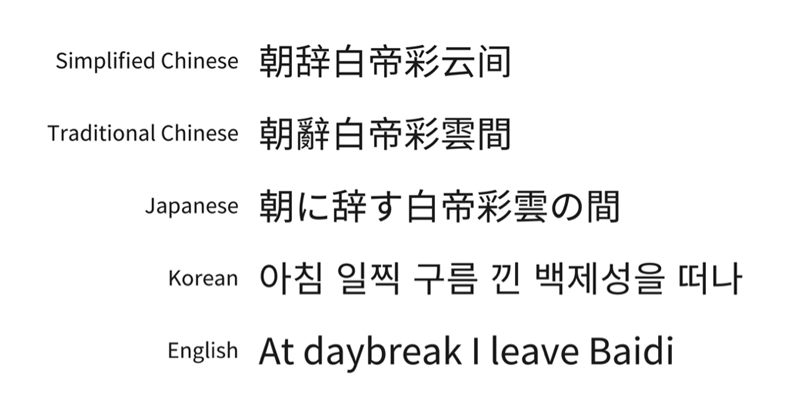 This is a rather large undertaking for any type foundry, and we couldn’t have done it without Google as a key partner. Our discussions with the type team at Google started more than three years ago when they identified a need for an open-source typeface that covered a broad set of East Asian languages. They reached out to Adobe, where we had recently started development on our own open source typeface family. It was a good match; Google contributed significant input into project direction, helped to define requirements, provided in-country testing resources and expertise, and provided funding that made this project possible; Adobe brought strong design and technical prowess to the table, along with proven in-country type design experience, massive coordination, and automation.

Ryoko Nishizuka, a Senior Designer on our Tokyo-based type team, created the underlying designs for the new typeface family. The key requirements were daunting: the family had to cover the broad set of languages mentioned above, and also support regional glyph variations from the regions using those languages. (In some cases, glyphs based on an original Chinese pictograph might have as many as four regional variations.) It was also very important that the typeface perform exceptionally well for print, and across the screens of the many tablets and mobile devices in use today.  Finally, Adobe planned on including Source Sans for the Latin glyphs, and Google needed the font to work well with their Roboto and Noto Sans families.  The new design needed to complement both, since Google is also offering their own version of this font.  More information on Google’s Noto Sans CJK family is available on their blog.

Ryoko created a typeface that is moderately modern in style, with simplified strokes and a monolinear quality. This makes it more readable on smaller devices such as tablets and smartphones. But despite its simplification, it retains much of the elegance of a traditional sans serif typeface design, providing a high level of readability for text consisting of single lines or short phrases as found in software menus, or for longer text blocks such as those found in ebooks. 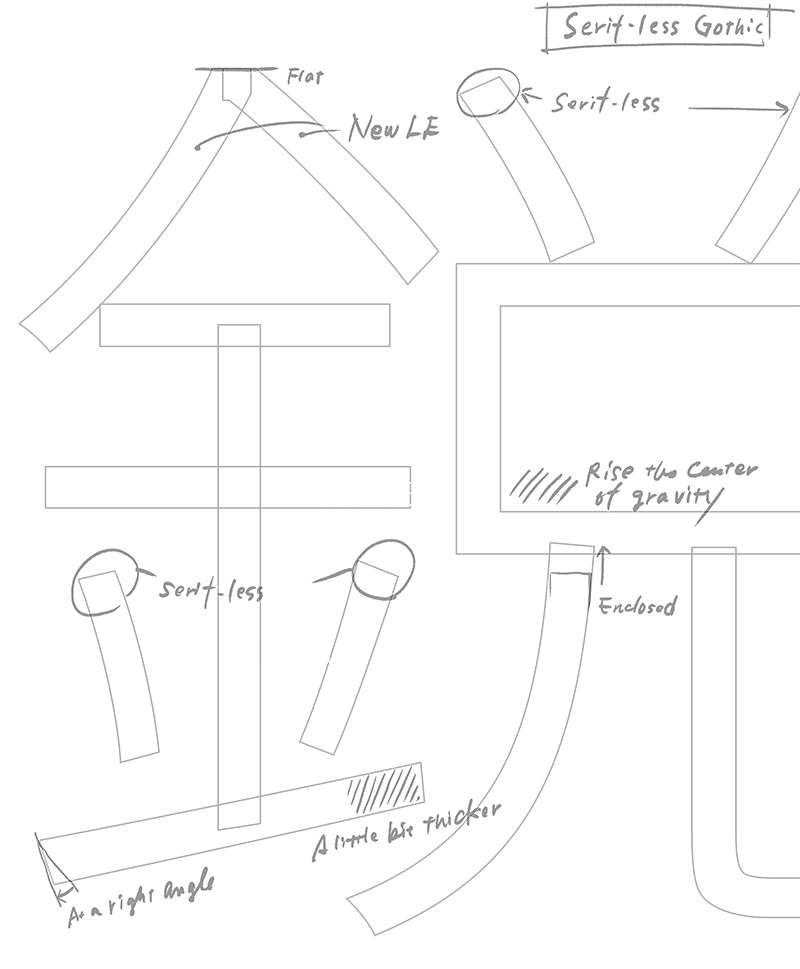 An early draft of a Kanji character. 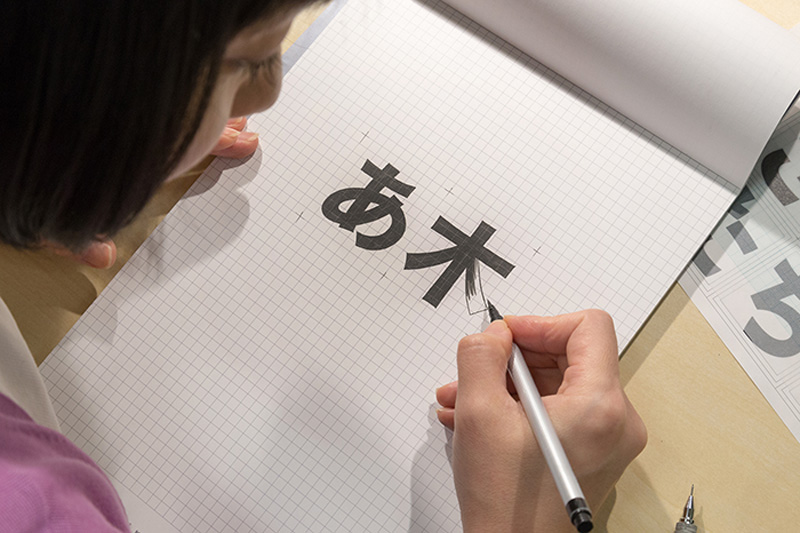 Type designer, Ryoko Nishizuka, drawing some of the characters for Source Han Sans.

With Ryoko’s designs in progress, we knew that to develop a truly successful Pan-CJK font, we would require expertise that could be found only in type foundries with years of in-country design experience. We chose to partner with Iwata to expand our Japanese glyph selection. In Korea, we went with Sandoll Communication, who also designed the Korean hangul (the native alphabet of the Korean language) and in China, we partnered with our longtime friends at Changzhou Sinotype. Our project had now grown to become a collaborative effort between five companies — something somewhat unprecedented in the world of type design.

Why was it important to get this expertise? Well, the writing systems for each language, particularly their ideographs that are based on historical Chinese forms, took different paths over time. While some characters remained unchanged and common across the languages, others morphed into regional variations. One can see these in the glyphs represented below. While the variations may be subtle, especially to the Western eye, they are very important to the users of each language.

The final requirement was for someone to pull it all together — and that person was Dr. Ken Lunde. Ken is our world-renowned CJKV type expert, and he ultimately managed the specification of the glyph set and Unicode mappings, the interaction with our partners and consolidation of their glyph content, and the creation of the final font resources. Acting as the primary contact with Google, Ken spent thousands of hours reviewing designs, delivering intermediate releases and overseeing the testing of the family. It is largely due to Ken’s efforts that we are able to release Source Han Sans, our 101st Adobe Originals typeface, as we celebrate our 25th Anniversary.

Where to find Source Han Sans

Source Han Sans is available in the following weights: ExtraLight, Light, Normal, Regular, Medium, Bold and Heavy. It is available for desktop use with any level of Typekit plan (including the free level), and can be synced for use in any desktop application. If you haven’t tried out desktop font syncing before, it’s pretty simple.

UPDATE: As of version 1.002, Source Han Sans has been available under the SIL Open Font License (OFL) v1.1. Downloadable versions of the full multi-language font family, individual language subsets, and original sources, are available on GitHub. Google will release their own version of this font under the name Noto Sans CJK as part of their Noto pan-Unicode font family.

Principal Product Manager for Adobe Type. I live on a small ranch in the Sierras with lots of animals, but spend most of my time helping to wrangle fonts, customer questions and our traditional type business.