In the past several posts in this series, we’ve discussed how to use Typekit font events in your CSS to control the FOUT and apply fallback fonts and styles. But there’s another aspect that we haven’t yet discussed: font events can be used via JavaScript callbacks as well. 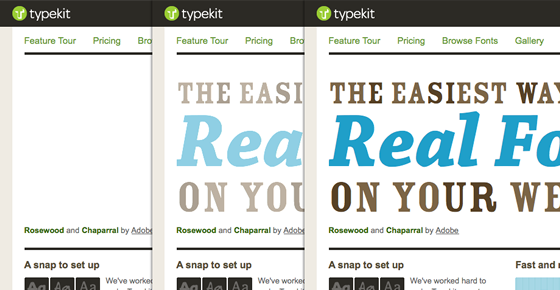 Font event JavaScript callbacks in action on the Typekit homepage.

Why would you want to use font events in JavaScript? We’ve already discussed using font events in CSS to avoid the flash of unstyled text. However, if you have very large text set in a web font, such as in a module promoting a product, the sudden appearance of that text may be jarring. In this case, you may want to fade in the text gradually after the font is loaded (an effect that wouldn’t be appropriate for an entire page of body text). This is where font event JavaScript callbacks come in handy. In fact, we use font events and JavaScript to achieve a fade-in effect on the Typekit homepage.

Let’s take a look at a simple example page that demonstrates one way to accomplish the fade in behavior using these JavaScript callbacks. Our example uses the jQuery JavaScript library to make things like DOM manipulation, hiding, and fading elements easy, but you could just as easily use another library. Here are the basic steps necessary to achieve this effect: 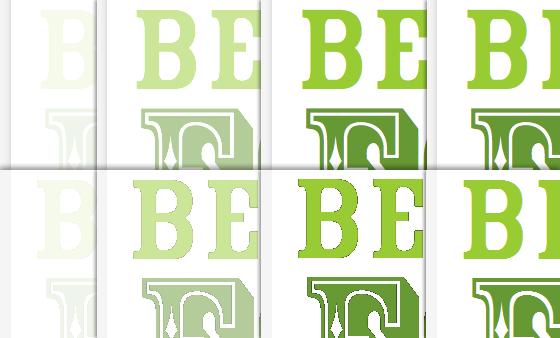 Time-lapse capture of the example page fade: Mac Firefox above, Windows IE8 below

Unfortunately, when you look at this example in Internet Explorer, you’ll notice that there are some jagged black outlines around the edges of the characters as they fade in. This is because IE8 and below don’t support CSS opacity, but instead use a proprietary filter. The upcoming release of IE9 will reportedly support CSS opacity and should address this issue. However, if we want to avoid these jagged outlines now, we need to make sure that browsers that don’t support CSS opacity use an alternate effect, such as showing the text immediately. jQuery provides a handy jQuery.support.opacity property that we can use to test if a given browser supports CSS opacity.

Pulling it all together, here’s the JavaScript code from the example page that loads jQuery, loads our kit, and then sets up the fade-in behavior (while avoiding that effect in browsers that don’t support CSS opacity):

Now we’ve progressively enhanced our page for browsers that support CSS opacity with a fade-in effect that makes the appearance of our web font less abrupt. Again, this type of effect is most appropriate for small amounts of large text, not for an entire page of body text. Typekit font events give you the control you need, allowing you to conditionally trigger CSS styles and JavaScript code as the fonts are loading.

This is the last post in our series on font events. If we missed covering an application of font events that you’re interested in, let us know in the comments. And as always, you can email Typekit support with any questions. Thanks for tuning in!