Kerning on the Web

Kerning can refer to one of two things: spacing instructions that type designers put into font files to mitigate awkward character combinations, or spacing adjustments that graphic designers make as they typeset text. In today’s post, we’re talking about the former, though we’ve covered the use of Kern.js and Lettering.js here before for readers interested in learning even more.

Imagine each character in a string of text has a box drawn around its outer edges. Without kerning, characters would line up at the edges of these boxes. Kerning enables these edges to overlap so the space between each character can be adjusted to be tighter or looser. 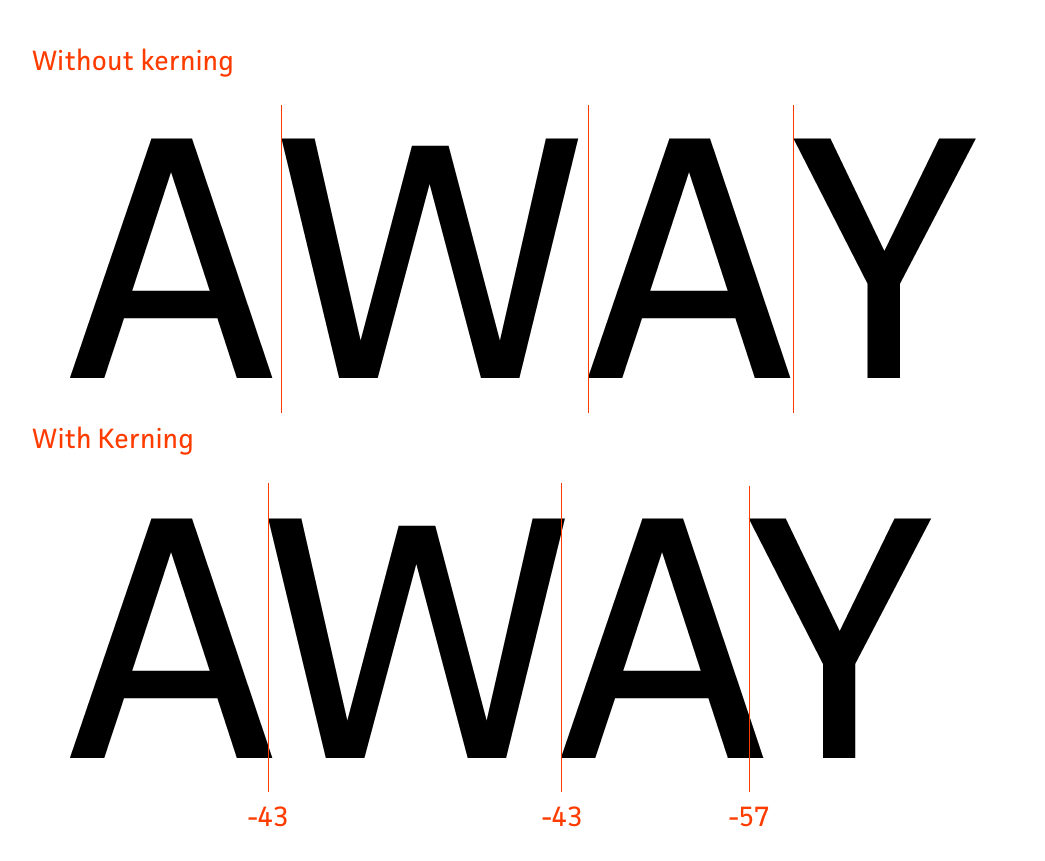 The word “AWAY” without and with kerning set in JAF Facit.

Browser support for kerning is surprisingly good. With the exception of Chrome on Windows, all modern browsers support kerning. There are, however, some differences in how kerning is enabled, and whether it is turned on by default or not.

There are currently two ways to enable kerning in CSS. The first is the text-rendering property introduced by the SVG specification to give hints to the text rendering engine. It was adopted by Gecko and WebKit based browsers (such as Firefox, Safari, and Chrome) to control text rendering for HTML as well. The optimizeLegibility value of the text-rendering property not only enables kerning, it also enables ligatures and other typographic features. However, it is not an official CSS property.

The second way to enable kerning is by using the CSS font-feature-settings property. This property can be used to enable or disable specific OpenType features, such as ligatures, old style numerals, stylistic sets, and kerning.

Browser support for these two properties is shown in the table below.

To enable kerning in all browsers with kerning support, you’ll have to use a combination of the text-rendering and font-feature-settings CSS properties.

Unfortunately, the font-feature-settings property is still new and requires vendor prefixes (and vendor-specific syntax for older versions of Firefox), so you’ll need to include those as well.

Fonts served by Typekit include kerning data by default, so all you need to do is enable kerning through CSS. If you have questions about kerning or other OpenType features, please let us know at support@typekit.com.

Update 2014-07-31: This post was updated to reflect that Chrome on Windows supports kerning starting from Chrome 33.

Passing on the FDK Workshops Torch