It is with great personal pride and relish that I announce the release of two new Adobe font families for Indian languages. Adobe Tamil and Adobe Gujarati were both released over the weekend, bringing the number of Indian writing systems supported by the Adobe Type Library to a total of four. Each of these families consists of two styles: a regular and a bold. The designs have been completed with print work in mind, as traditional publishing is still very much a vibrant industry within India. These new type families follow the release of two other Adobe type families for Indian languages, Adobe Devanagari and Adobe Gurmukhi, which have already been available for some time. All of these families are currently available for purchase from Fontspring. 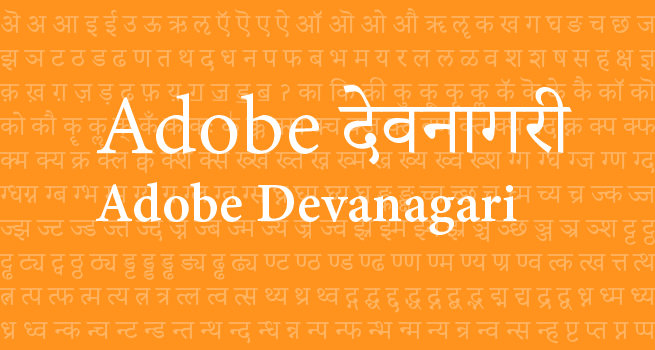 Adobe Devanagari was the first of Adobe’s Indian font families, and was designed for Adobe by the team at Tiro Typeworks beginning in 2005. The design was conceived by Tim Holloway and Fiona Ross, Tim being the principal designer of the artwork in collaboration with Fiona and supported by John Hudson. The construction of the letters is based on traditional penmanship but possesses less stroke contrast than many Devanagari types, in order to maintain strong, legible forms at smaller sizes. To achieve a dynamic, fluid style the design features a rounded treatment of distinguishing terminals and stroke reversals, open counters that also aid legibility at smaller sizes, and delicately flaring strokes. Together, these details reveal an original hand and provide a contemporary approach that is clean, clear and comfortable to read whether in short or long passages of text. This new approach to a traditional script is intended to counter the dominance of rigid, staccato-like effects of straight verticals and horizontals in earlier types and many existing fonts. The family consists of regular, bold, italic, and bold italic styles. The font supports modern Hindi and Marathi languages, and also contains some features to enable basic setting of Sanskrit. The fonts were released with Creative Suite 6 in the spring of 2012. 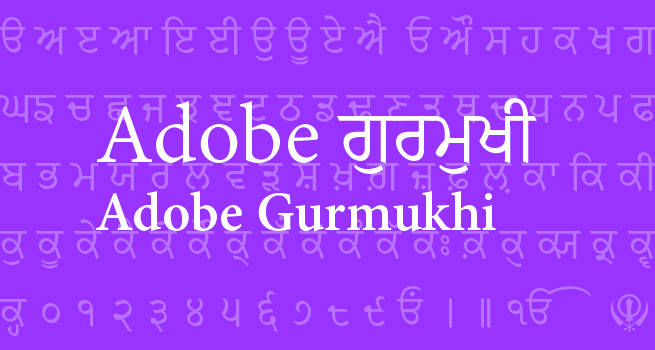 Also in 2012, I was tasked with initiating a program to develop an extended set of fonts for Indian languages. Adobe has been continually improving enablement for Indian languages in our creative applications since Creative Suite 6. The Creative Cloud versions of InDesign, Photoshop, Illustrator, Dreamweaver, Flash, and Acrobat all support the top 10 languages of India. We on the type development team have made it part of our mission to provide high-quality typographic families to showcase these new language capabilities. We decided we would first focus on designs optimized for print to support our desktop publishing applications. Therefore, I reasoned that it would be prudent to develop a set of design-compatible fonts that would pair well with the existing Adobe Devanagari typeface. In approaching this objective, I have attempted to guide designers with whom we have worked to try to harmonize important parameters such as apparent size and color and to try to match style and design details as much as is appropriate.

The first project to follow after Devanagari was Adobe Gurmukhi, which I designed collaboratively with Vaibhav Singh in 2012. Professor Christopher Shackle and John Hudson consulted on the design. The concept for this family was to follow the design principles of the Devanagari and to develop a type style for text setting based on Gurmukhi broad-nibbed calligraphy. This treatment is a departure from the more popular monoline type styles that are in circulation today. The rationale behind this approach was to reintroduce some of the attractiveness of modulated letterforms to Punjabi text typography while retaining letter shapes familiar and legible to today’s readers. The design features some more cursive letter constructions than are the norm, but I have attempted to draw these in a way that they do not draw attention to themselves. 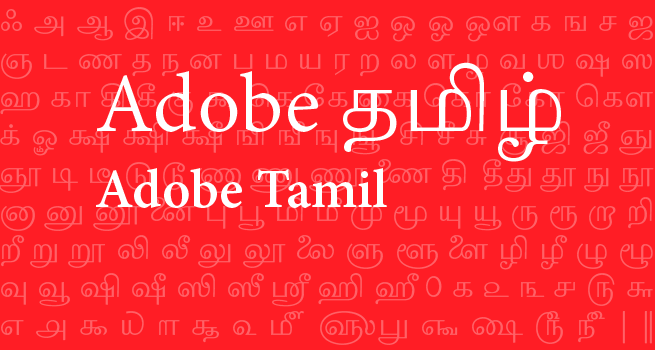 Adobe Tamil was designed by Fernando Mello. Fiona Ross and Rathna Ramanathan consulted on the design. In contrast to the broad-nib pen construction pattern evident in the Devanagari and Gurmukhi, Tamil letter shapes are based on the effects of a pointed pen. Despite this difference in ductus model, the design harmonizes well in terms of a contemporary approach to styling. A defining feature of this particular design is the upright stance of the Tamil letters. Whereas many available Tamil fonts are sloped in style, Adobe Tamil follows what is typical in penmanship. The default text shaping favors the simplified, modern orthography, however, the fonts also include stylistic sets that can be used to emulate more traditional writing. 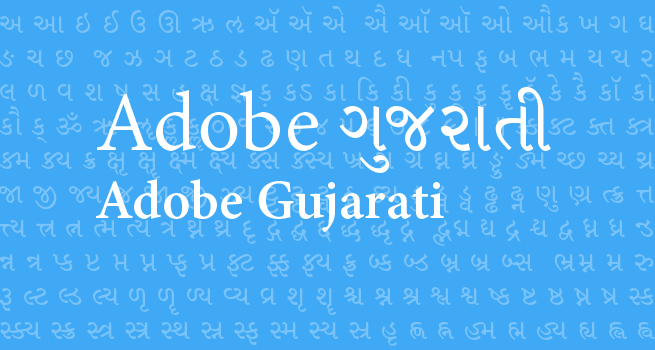 Adobe Gujarati was designed by David Březina of Rosetta Type. Fiona Ross consulted on the design and valuable feedback was provided by Kalapi Gajjar-Bordawekar and Hitesh Malaviya. As with the Gurmukhi, the brief for the Gujarati was to follow the design language established by Adobe Devanagari. In fact, the Gujarati and Devanagari writing systems resemble each other in many ways with the notable feature of Gujarati being that it lacks the headline that is such a prominent component of Devanagari.

The current versions of all of these fonts have been produced in-house by Adobe’s type development team using the Adobe Font Development Kit for OpenType. I completed the main portion of OpenType feature development for the Gurmukhi, Tamil, and Gujarati. Miguel Sousa provided scripting assistance and aided in mastering of the final font files. Miguel also produced the latest versions of Adobe Devanagari to add better support for Marathi typographic preferences.

With these most recent type releases, the Adobe Type Library now has basic coverage for five of the top 10 languages currently used within India. Typefaces for additional writing systems and more type styles for some of the scripts listed above are also currently under development. Our end goal is to be able to offer a full range of type options for all of the Indian languages our applications support, and with today’s milestone release, we are well on our way.