Today marks Robert Slimbach’s 25th anniversary with Adobe. Robert joined Adobe’s Type staff on March 2nd, 1987, as Adobe’s nascent program for original typeface design took shape under the guidance of Sumner Stone. Since then, Robert has accumulated awards and accolades for his work, including the Prix Charles Peignot in 1991, and numerous Type Directors Club awards. In 2006, Robert became Adobe’s first Principal Designer — a title he probably earned in spirit long before that.

Most type professionals and enthusiasts are well-acquainted with Robert’s body of work, but to summarize, here is a complete list of his typeface designs (and the year of their first release):

(Note that many designs have been revised, expanded, and released in different formats since their first appearance.) 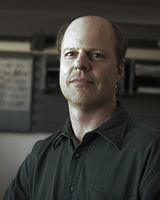 At the risk of embarrassing Robert, it’s fair to say he’s one of the greatest living type designers. His typefaces are almost unfailingly humanistic, but usually lost underneath the virtuosity of his design is a foundation of technical precision and ambition, and a concern for practical and lasting usability. Through these qualities, Robert has often led the way for Adobe’s various typographic innovations — from multiple masters, to the embrace of optical sizes and non-Latin scripts, and the advanced capabilities of the OpenType format.

Not only are Robert’s 25 years at Adobe a testament to his talent, durability and adaptability in the face of constantly changing technology, but they are evidence of Adobe’s ongoing commitment to original type development, and an acknowledgement of the important role type has in all of Adobe’s products. On this occasion — and on behalf of all of us on the Adobe Type team — I’d like to extend my thanks to Robert and to Adobe for their long-standing support and advancement of the typographic arts.

Sites we like: CIR, PRE/POST, and Kern and Burn