On Tuesday, Adobe’s Typekit office hosted the west coast premiere of Linotype: The Film with two back-to-back screenings. A few of us on the Adobe Type team were there and share our thoughts about it: 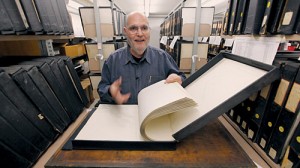 David Lemon: I really liked Frank Romano’s historical perspective. I’d come across a lot of that material before, but had never learned what inspired Ottmar Mergenthaler to create the first Linotype machine. And as a Type person, I appreciated Nadine Chahine’s point that the machine’s great commercial success supported the development of the world’s preeminent font library – which has long since outlived the machine.

Frank Grießhammer: What I liked is that really all the aspects of the machine were illuminated, from the history of its creation, to the pinnacle of its success, to its replacement by other technologies. Even the Linotype’s value in terms of scrap metal was mentioned, and the difficulties (in sheer personal investment and energy) that are to be taken to keep a Linotype running today. All those facts were embellished with a wealth of ancedotes, e.g. the fascinating story of “etaoin shrdlu.” A great movie, which I can easily see being interesting to festival-goers that are not necessarily 100% type nerds.

Christopher Slye: Honestly, I was grinning for half the film. It’s ambitious enough to make the case that the Linotype was just about the most important invention for human knowledge following movable type itself… but it also finds that the people who have spent their careers operating or otherwise depending on them are smart, proud and funny. It helps that it’s all nicely filmed and briskly paced. A few familiar faces put it all in context for the type enthusiasts and professionals, but it turns out the Linotype — quirky, complex and slightly dangerous — has more universal appeal than expected.