Update: As of January 30th, we’ve now reached 5 billion font views per month, up from 4 billion per month less than three months ago.

A year ago, we gave our first close look at the numbers behind Typekit’s web font service; since then, web fonts have moved from an exciting frontier to the mainstream, with adoptions across a range of sites (both large and small) and continued, exceptional growth.

Today, Typekit delivers nearly 4 billion font views per month. What’s more, font views have consistently doubled every four months for the past two years: an amazing rate that shows enthusiasm for web fonts is in no danger of waning. 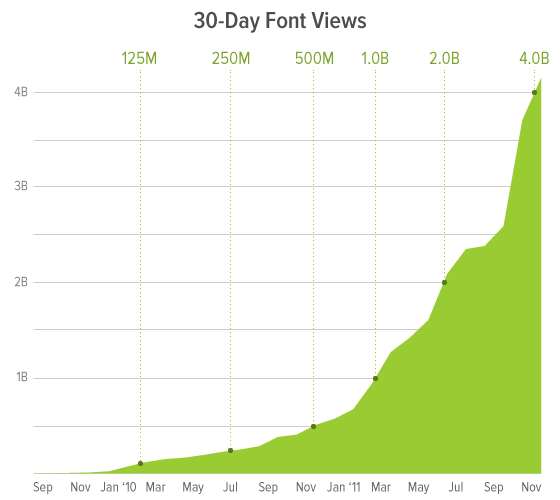 Font views have doubled every four months for the past two years, reaching over 4 billion views this November.

And this traffic is global: over 100 countries serve more than 1 million font views each month, from Australia to India, South Africa, Brazil, and nearly everywhere in between. 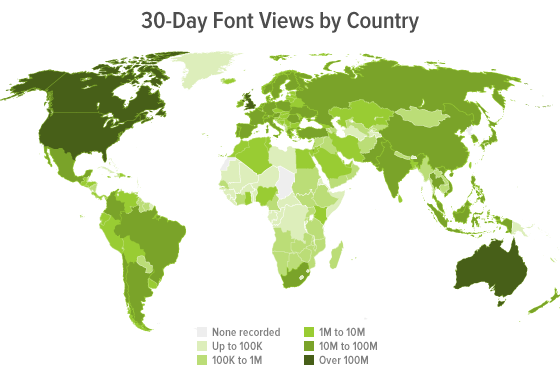 Web fonts are truly global, with traffic across 239 countries and territories.

Moreover, web fonts are not merely the province of blogs and designer portfolios. Typekit’s Enterprise Plans serve fonts to really massive sites, including The New York Times, Wired, Zynga, The New Yorker, Gawker, and more. Together these sites serve more than 2 billion fonts per month—just over half of our total traffic.

And we’re still growing: bigger sites (and more of them) are on the horizon, as web fonts move from nice-to-have to can’t-live-without. We’re honored to have come this far, and excited for what the future brings. Here’s to a great new year.