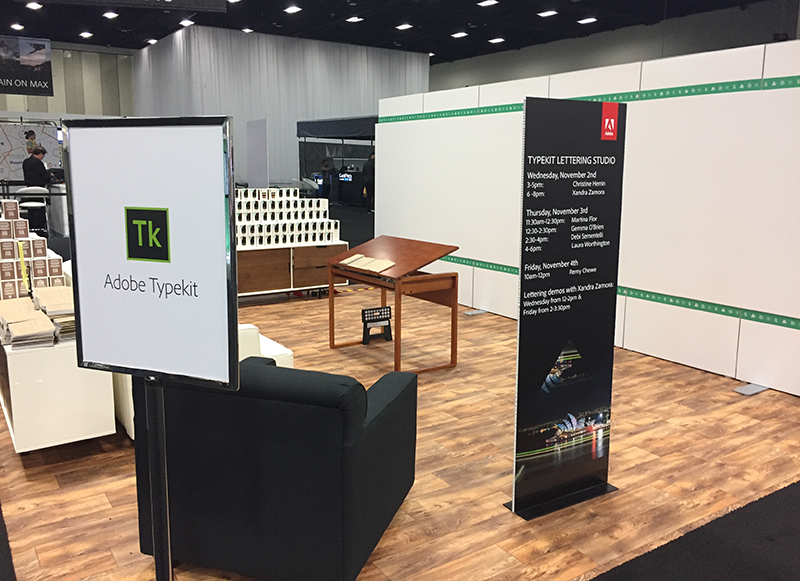 A drafting table faces a blank wall, a possible canvas outlined by a green border of ampersands, and (for close observers) the Typekit logo. Conference-goers pause to ask questions about the newly-launched Marketplace, to pick up some swag, or to watch foundry videos looping on the opposite side.

Mid-afternoon a woman arrives, armed with a ruler and a Sharpie. Within two hours she has departed, leaving behind a whimsical “I” filled with bouncy and joyful hand-lettered words describing Adobe MAX. A few hours later, a swashy “P” joins it. The Typekit Live Lettering Wall has come to life.

Our analog answer to “How can there be so many fonts?”

We invited seven different artists, all with different styles, to add one letter from “Typekit” to the wall over the three days of the Adobe MAX conference. The artists were given no advance instructions other than the size of their individual canvas, a sample of the material, and their letter assignment.

The end result? A beautiful and unique piece of typographic art. Here’s a rundown of the letters and the artists behind each one. 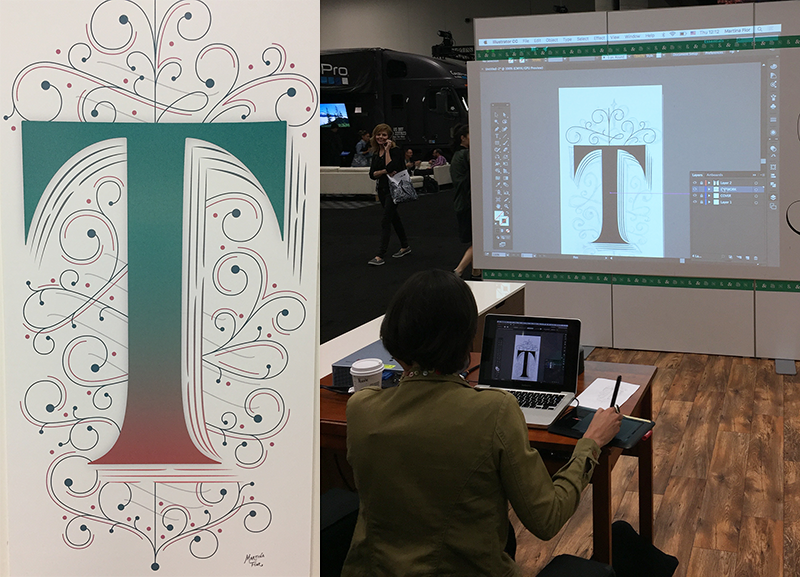 Berlin-based designer and illustrator Martina Flor created the first “T” on Thursday morning. As someone who works primarily in the digital realm, she suggested the best way to demonstrate her live lettering method would be to project her working within Adobe Illustrator. Martina sketched out her work on paper, then scanned into Illustrator, projecting her progress on to the wall as she traced it and continued to hone and add flourishes. We printed and attached the work shortly after completion so that her “live pixels” could remain on the wall. 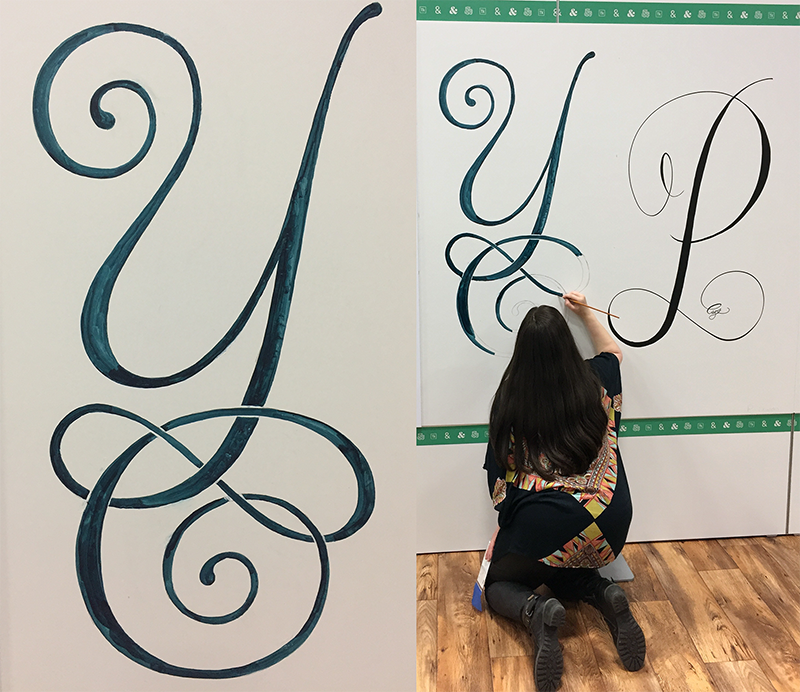 Type designer Laura Worthington projected a sketch of her “Y” late Thursday afternoon and penciled it onto the wall. She then carefully filled in it, with special attention to the the elaborate, swirling descender. Laura, along with Debi Sementelli, taught two full brush lettering workshops at MAX this year. 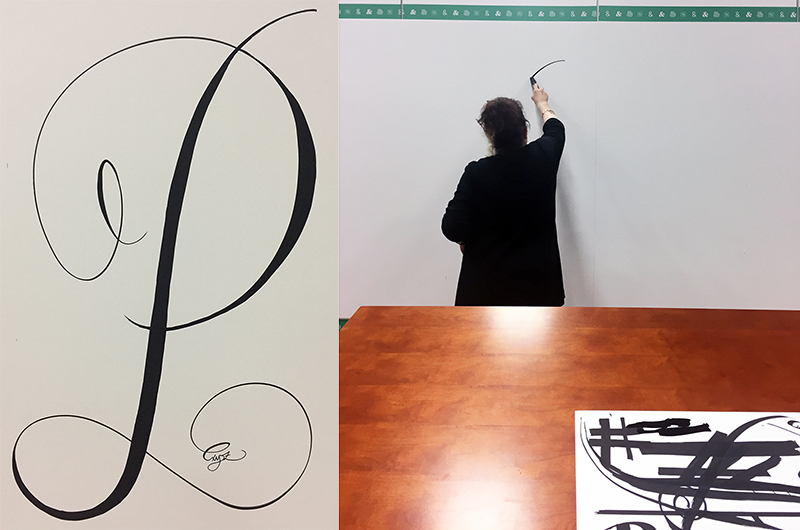 Xandra Zamora‘s “P” was the second letter to appear on the wall. Xandra’s calligraphy is usually on a much smaller scale (she also demoed her methods by writing names in attendee’s Scout Books), so she approached the wall as a very large piece of paper. She impressively and quickly freehanded her contribution during Wednesday night’s welcome reception.

Commercial illustrator Gemma O’Brien arrived to the empty hall early Thursday with her portable projector so she could pencil out her “E” before the crowds arrived. She returned later, put on her headphones, and got into the zone, bringing the outlines to life with shadows, dots, and line art. Gemma and Martina worked side-by-side for part of the afternoon. Quite an audience gathered around, with both artists having distinctive styles, popular MAX talks, and growing fanbases. 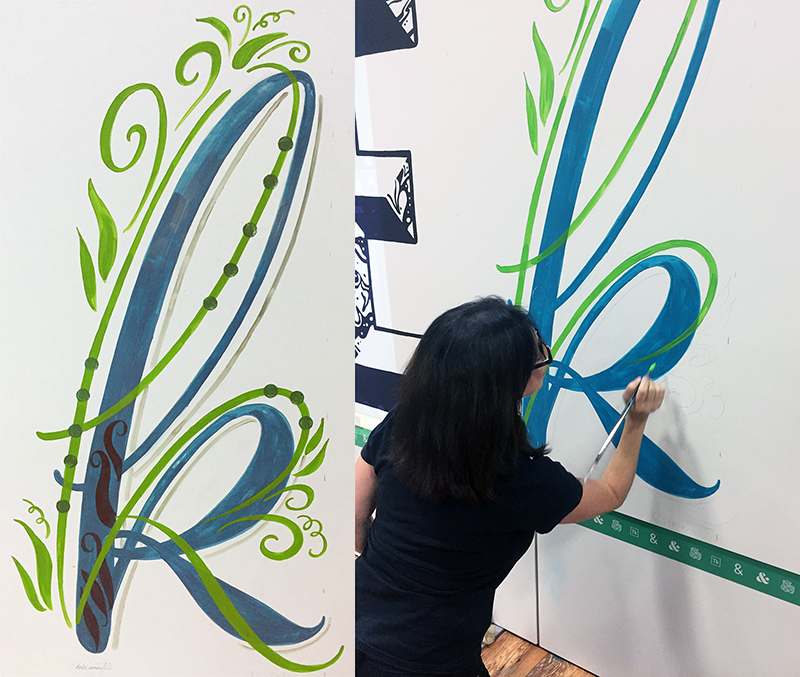 Type designer and lettering artist Debi Sementelli also used a projector to sketch out her elaborate “K”, which she brought to life with multiple colors and illustrative flourishes. Debi taught the brush lettering workshops alongside Laura, and the two artists simultaneously painted their letters to round out Thursday in the Community Pavilion. 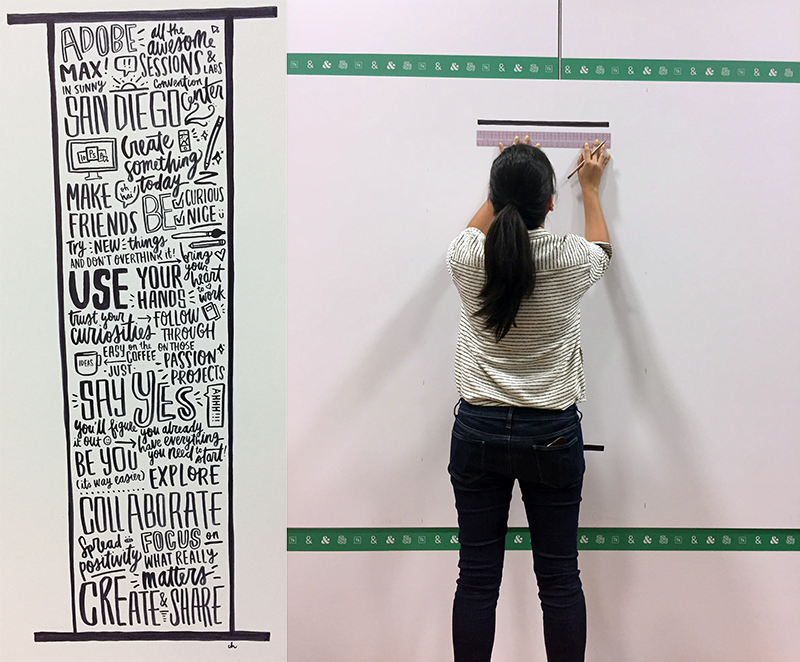 Adobe Creative Resident, graphic designer, and hand letterer Christine Herrin is the woman behind the “I” – the kickoff letter on the wall. When we created the project we knew the “I” would be a challenge because, let’s be real, it’s not always the most exciting entity in the alphabet. Christine brought it to life, encapsulating a variety of different lettering styles (and delightful illustrations) within its borders. 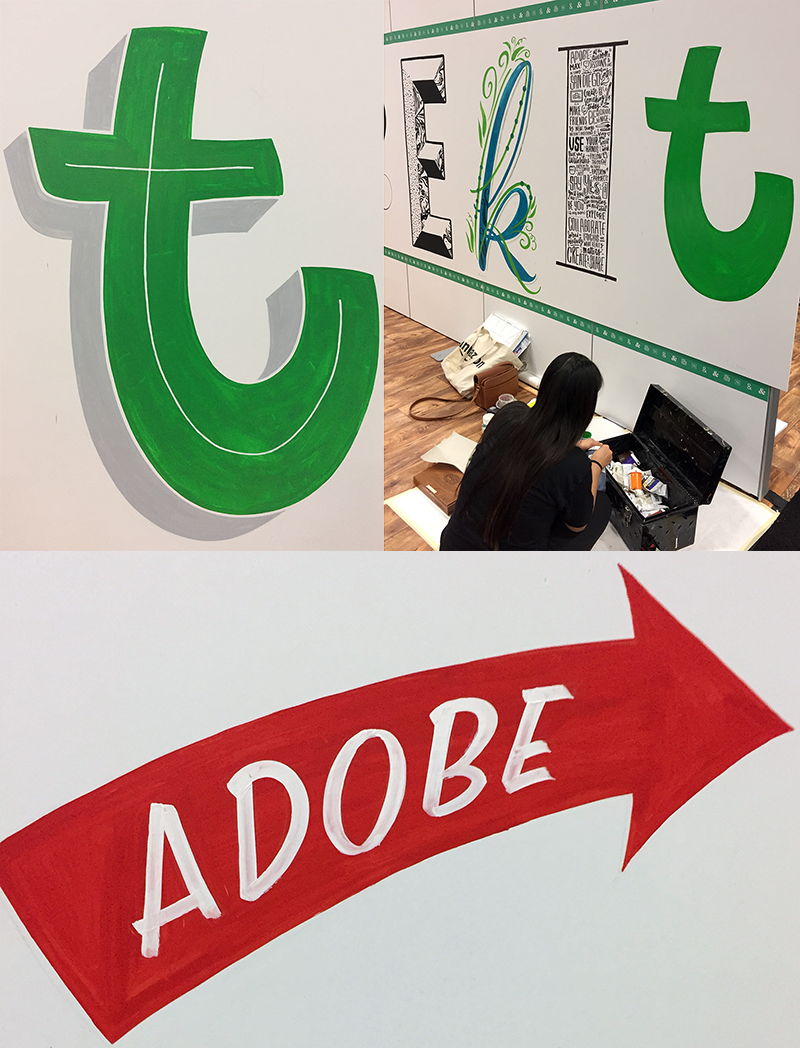 Los Angeles lettering artist, sign painter, and designer Remy Chwae added the final touches to the wall, with a Typekit green “T” and a red Adobe arrow. Her retro style perfectly echoed the plethora of vintage SoCal signs around the host city of San Diego.

Our team was so pleased to bring this wall to MAX and life. We extend our gratitude and appreciation to all the artists who participated and to all the attendees who stopped by!