The Source Project and Open Source Collaboration: A work in progress

In August 2012, Adobe released its first open source typeface family, Source Sans Pro. We followed up a month later with its monospaced companion, Source Code Pro. The response was overwhelmingly positive, and elicited a terrific amount of feedback from the open source community and the type and design world. Paul D. Hunt, principal designer/developer for the Source Sans and Code types, and Miguel Sousa, a significant contributor to the project, spoke at TypeCon2013 in Portland last August about their experiences with the project. Below is some of what Paul and Miguel presented to this annual gathering of type makers and type users. 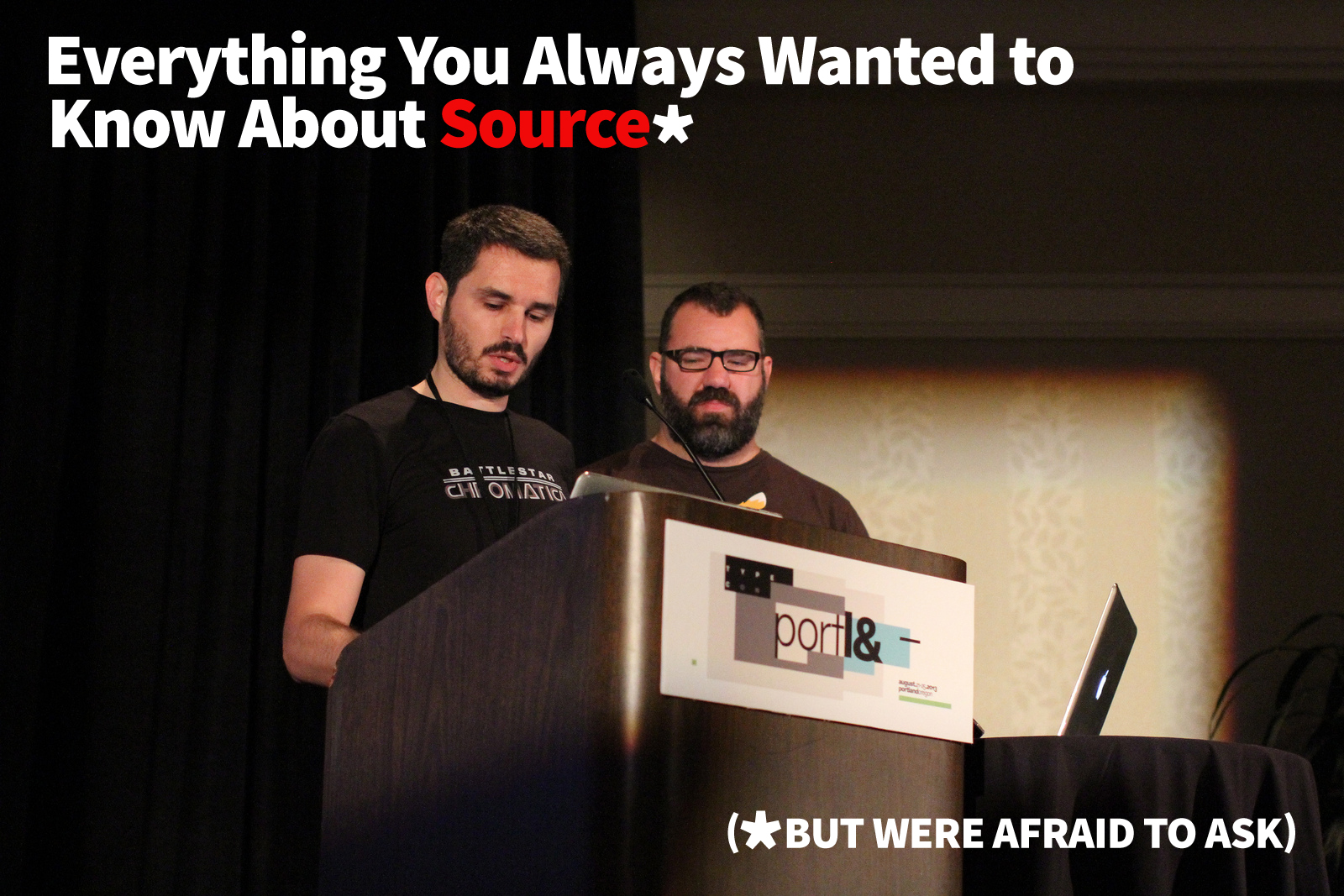 The Source project has been an interesting one for the Adobe Type team. Not only was Source Sans our first open source typeface, it has also led to us changing our development process and tools. But one of the most important aspects of the Source project was that it gave us a unique opportunity to engage with the type and open source communities.

One of the most crucial pieces of feedback we received from the open source community after releasing Source Sans on SourceForge was that the project should also live on GitHub. (GitHub is extremely collaboration-friendly and boasts the world’s largest open source community.)

The gentle prodding went a little something like this:

It was a pretty subtle hint, but we got the message. There was just one tiny little problem: none of us on the type team even knew what GitHub was. So we did what any self-respecting group of geeks would do under the circumstances.

“At the time, we had not heard of GitHub,” Miguel said. “So we Googled, learned a bunch of lingo, new tools, processes, and watched many Lynda videos to get up to speed. It was a great learning experience to see the whole process illustrated in this way.”

Once they got the hang of it, Paul and Miguel found Git more flexible than Perforce (our previous code management tool), and felt it was easier to use. Even better, its distributed architecture allows each developer to have a master copy of the files and record changes without having to be constantly connected to a remote server.

Little did we know that our education in all things Git would end up sparking an internal revolution, and lead us to a new development environment and workflow. With Miguel carrying the torch, our team made the transition from Perforce to Git in under a month (all while still responding to feedback and addressing bugs in Source Sans). This shift was no small feat, but we’re thrilled that we moved to a more agile workflow.

“Using GitHub, we are able to share our changes and collaborate with internal and external parties,” Miguel said. “This is the workflow we use with open source projects, and we’re starting to develop our commercial fonts this way as well.”

Along with changing up our workflow, the Source project has led to interesting conversations with the type and open source communities. In the year-and-a-half since Source Sans was released, there have been tons of requests for features and updates. We’ve been doing what we can to address some of these in-house. For instance, when we unveiled a sneak preview of a monospaced version in the Source Sans launch announcement, the response was terrific. So we got busy and fast-tracked the release of Source Code.

Our biggest collaboration so far has been with the folks at Logos Bible Software, who wanted to extend Source Sans for use in the UI of their Bible software. Logos hired type designer Marc Weymann to add small caps and superscript caps to the upright styles. These additions have made Source even more useful to developers and end users, and we are determined to continue this trend.

“Now that we’re happily in love with Git and the Source project lives on GitHub, we’re looking forward to seeing more people contribute to the project,” Paul said.

Although the Source project was started here and is currently maintained by Adobe, it really belongs to the community. Our small team continues working on Source as time permits, but there is a huge wishlist of features waiting for implementation. People already want Source extended much faster than we can do it here, and we hope the community will join in to fill the gaps. We’re really excited to see what the future holds for the Source project.

After Paul and Miguel’s talk at TypeCon, they were approached by a number of type designers who expressed interest in the Source project and open source type development in general. Nothing concrete has emerged from those discussions—yet.

Time is tight for everyone, and type designers have their own projects to work on. We are all too aware that type design is a super specialized skill, and that there is a relatively small group of people with the chops to really dig in and expand a project like this. But we also know that, as Source becomes more widely adopted, type users around the world will beg for more features. It would be a real pleasure to see our friends and colleagues lend their unique talents to help make Source a type system that will continue to give back to the community for many years.

“When open source projects are enhanced, it benefits everyone,” Miguel said. “This project will become even better as more people participate.”

Greek and Cyrillic language extensions for Source Sans are currently in the works, along with italics for Source Code.

The fonts you love from Typekit, now on your desktop