Adobe, in partnership with the Dutch Type Library, is pleased to announce that Dr. Donald E. Knuth has been named the recipient of the Dr. Peter Karow Award for Font Technology & Digital Typography. 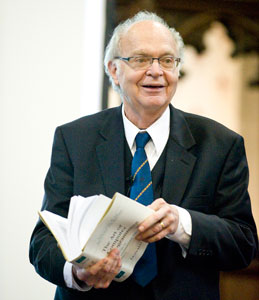 This prestigious award was established in 2003 by the Dutch Type Library (DTL) as a means to celebrate visionaries who have made exceptional innovations in the development of digital type and typography-related technology.

The inaugural award was presented to its namesake, Dr. Peter Karow, at the third DTL FontMaster Conference held near Den Bosch, The Netherlands, in 2003. Dr. Karow, one of the founders of URW Software & Type GmbH, invented Ikarus, the spline-based type design and production software developed to convert typefaces and logos from photographic film into scalable digital fonts and symbols.

The second Dr. Peter Karow Award was presented to Thomas Milo at the Type[&]Design 2009 Conference in The Hague, the seat of the Dutch government. Thomas Milo and his DecoType team were honored for the Advanced Composition Engine (ACE), a revolutionary typographic technology designed to solve the formidable Arabic script shaping, kerning, and line layout challenges (ACE sits at the heart of the WinSoft Tasmeem plugin for Adobe InDesign Middle Eastern). The ACE font layout engine pioneered the “smartness” needed to support scripts that require a more thorough technology than their Latin counterparts. The Dutch government was represented at the award ceremony.

Born in Milwaukee, Wisconsin, in 1938, Dr. Knuth is a renowned computer scientist, mathematician, author, and Professor Emeritus at Stanford University in Palo Alto, California. He is being honored with the Dr. Peter Karow Award for his varied and significant contributions to digital typography and font technology.

Dr. Knuth developed TeX, a powerful typesetting system released in 1978, and Metafont, a computer language for creating letterforms by mathematical means. Through his work on Metafont, the Computer Modern and Euler types, and other projects, Dr. Knuth collaborated with a number of type designers, including Professor Hermann Zapf.

Professor Zapf, a master calligrapher and book designer, felt a kinship with Dr. Knuth, as the two shared a deep interest in perfecting computerized book typesetting. Professor Zapf appreciated Dr. Knuth’s intention to electronically emulate the strokes of a broad-nib pen and the pressure the human hand puts on the nib when forming calligraphic shapes. Professor Zapf also collaborated on Dr. Knuth’s Bible project “3:16,” an endeavor to identify and reinterpret all Bible verses starting with 3:16. The project resulted in a book and series of exhibitions featuring the selected verses illuminated in calligraphy by artists from around the world.

Other visionaries in the type community consider Dr. Knuth’s work incredibly significant and groundbreaking advances in the field. “TeX was written by Donald Knuth and released in 1978 when DTP was yet not invented,” Dr. Karow said. “After 1980, all this (TeX and Metafont) went around the world installed on all larger computer systems at universities and was the first commonly used ‘DTP program’.”

For the first time, Dr. Karow said, students were able to write their theses without employing a secretary, without using typewriters, glue, scissors, or copy machines. “The paragraph justification was excellent, never achieved before, as was the typography of formulas.”

Frank E. Blokland shared his favorite quote by Dr. Knuth: “Instead of imagining that our main task is to instruct a computer what to do, let us concentrate rather on explaining to human beings what we want a computer to do.”

“I want a computer to do all the tedious parts of the type design process for me and have one or two beers outside in the meantime, before adding the finishing touches to the design and signing it,” Frank E. Blokland said. “For instance, as Rembrandt and Rubens did with the paintings that were set up by their apprentices.”

Through his revolutionary developments, his belief in literate programming and programming as art, Dr. Knuth has helped take away much of the tedium inherent in modern type design, typography, and communications as a whole. His efforts have given typographic artists and content creators more tools, more paths to explore, and more freedom to focus on creativity and the perfection of their own important works.

Dr. Karow, David Lemon, and Frank E. Blokland will present the award to Dr. Knuth in a ceremony to be held at ATypI Amsterdam next month. The award includes a charter and the gift of a facsimile of the Delftse bijbel from 1477. Attendees of the awards presentation, to be held during the conference’s Special Event Dinner, will receive Digital Typography and Artificial Intelligence, a keepsake booklet by Dr. Karow.

We hope those of you attending ATypI this year will take time to congratulate Dr. Knuth in person— we’re delighted that he’s making the long journey from Palo Alto to Amsterdam to accept the award. While at the conference, Dr. Knuth hopes to catch a few of the talks while he catches up with old friends—and makes new ones.

Thanks a million for your support