Today, BlackBerry (formerly known as Research In Motion) officially launched their new BlackBerry 10 operating system for mobile devices. It includes numerous improvements over the previous version, but here at Typekit, we’re most excited about the new web browser. Built on top of the WebKit rendering engine, it brings support for the standard WOFF web font format to BlackBerry devices. We’re celebrating this advancement by announcing official Typekit support for BlackBerry 10 and up. 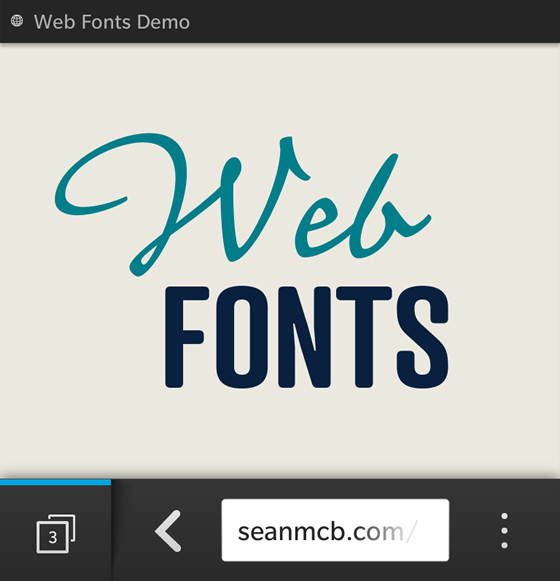 Screenshot of Typekit fonts rendering on a BlackBerry 10 device.

BlackBerry joins iOS, Android, and Windows Phone as the fourth major mobile operating system with support for WOFF, further boosting the share of mobile devices that have support for web fonts and the latest web standards.

In order to get BlackBerry 10 support with your own kits, just head to typekit.com and republish. If any of your kits were published on or after December 15, 2012 (when we first implemented experimental support for BlackBerry 10), then they should already work on the platform without any action on your part.

As with the rest of our supported mobile platforms, we’ve added an option to disable support for BlackBerry in kits. You’ll find this option in the Kit Editor under Kit Settings > Mobile Settings. Uncheck the box for BlackBerry and republish your kit to turn off support. This option is useful if you’re building a site that doesn’t require web fonts to be loaded on mobile platforms, or if you run into issues on BlackBerry and just want to turn the fonts off. 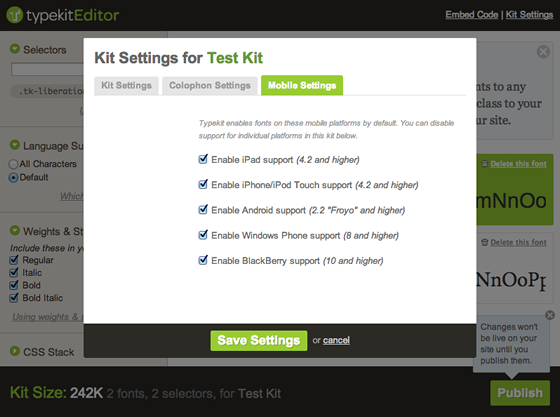 Settings for enabling and disabling support for mobile platforms, including BlackBerry.

As always, if you encounter issues with web fonts on BlackBerry or another officially supported platform, contact us at support@typekit.com and we’ll be happy to help.