A closer look at TrueType hinting

This is our sixth post in an ongoing series about type rendering on the web. Read the first, second, third, fourth, fifth, and final posts.

As Tim Brown explained in the previous post on font formats, glyphs in web fonts are stored as Bézier curves. The shapes are drawn as outlines that consist of nodes on the contour and so-called handles, which help control the exact shape of the curves. Since the contours are stored as abstract mathematical formulas, they are infinitely smooth and precise. As such, they can be scaled to any size. 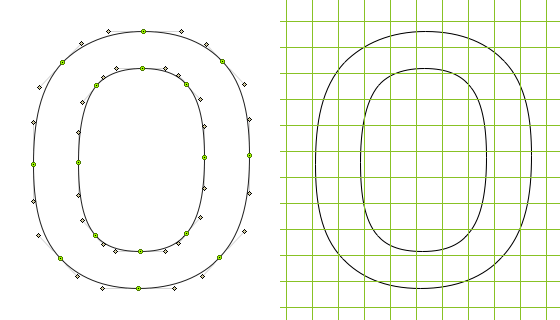 Glyphs are stored as Bézier curves but need to be rasterized for output.

On screen, however, the shapes have to be translated into pixels in a more or less coarse grid. In font technology, this resolution is expressed in ppem, which stands for “pixels per em,” and is exactly the same as the font size in pixels that you specify in CSS.

The simplest way to rasterize a letter would be to make the pixels black whenever the center of the pixel falls inside the shape. Unfortunately, this means that if part of the letter accidentally catches too many or too few pixels, the characters can become ugly or even unreadable. Missing pixels can pose as much of a problem as having too many.

In the unhinted example below, the left side of the letter happens to fall on two rows of pixels, whereas, by coincidence, the right side of the letter falls on only one row. As a result, our lowercase “o” is lopsided. In the worst case scenario, you can end up with dropouts, where the thinner parts of a letter fail to fall on any pixels at all and so disappear entirely. 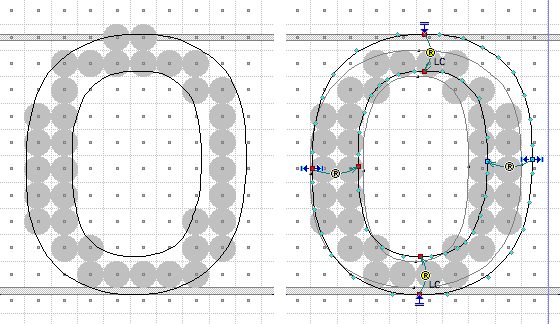 This is where hinting steps in. TrueType hinting — sometimes more correctly called instructions — bends the contour of the letter into a slightly different shape before it is rasterized. As a first step, this typically involves snapping the outline to the grid, as indicated by the blue arrows in the figure above. The top and bottom of the letter are linked to the gray alignment zones, which help control at which sizes the round letters such as the o “stick out” above and below the others.

Furthermore, we want to make sure that the stem weights are representative of the original when rasterized. Individually aligning the nodes to the grid would not achieve that; we need to link pairs of associated nodes, as shown by the yellow “R” symbols. These links control the distance between the two nodes — in other words, the stem weight. Categorizing the stems makes sure they are consistent across all glyphs in the font. In the above example, the horizontal stems are assigned to the “LC” class, which includes all comparable lowercase stems.

The smart thing about this kind of hinting is that it still works if the ppem size is changed, for example from 17 to 18. 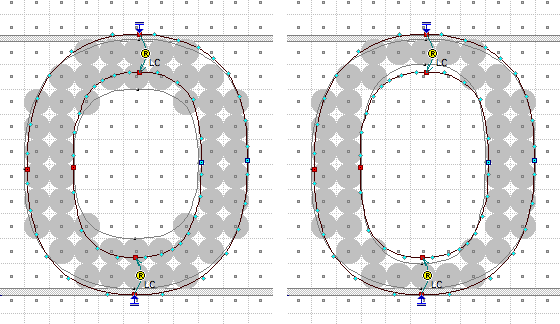 At some sizes the most appropriate stem thickness is debatable. In the above example, one has to choose between somewhat too thick or too thin; these are essentially design decisions and as such require a good understanding of the typeface and its stylistic character.

Note that so far, the hinting instructions that we’ve shown are not specific to a particular font size. TrueType hinting allows for specific tweaks at only one particular ppem size if necessary. This so-called delta hinting is a tedious process and is often promoted as a sign of font quality. However, it is not necessarily a sign of good hinting — if the right strategy is applied then general hinting can work well at all sizes and delta hints are unnecessary. 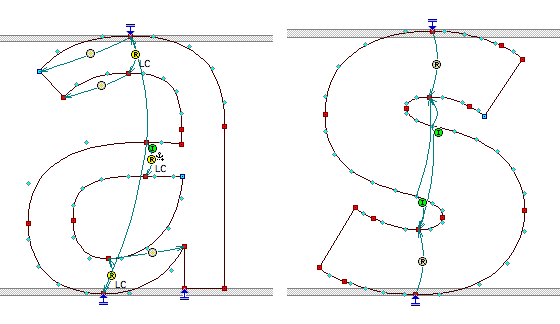 Finding a good hinting strategy can be tricky at times. Some more complex letters can require special attention, and design-related questions arise: do we want to keep the black strokes consistent, or should we preserve the white inner space? In extra bold fonts such as the “s” above, one might instead choose to preserve the relationship between the black and white parts of the letter. The interplay of black and white is at the very heart of type design (and, likewise, of reading).

In the next and final post in this series, Tim Brown returns to look at what’s ahead: now that we’ve surveyed the current landscape of type rendering, what do we have to look forward to?

The newest member of Typekit, Tim Ahrens is a type designer and architect who runs the London-based studio Just Another Foundry. He designed FacitWeb specifically for screen display.